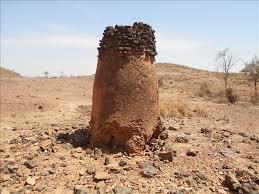 In the north-central region of Burkina Faso, the province of Sanmatenga, in the heart of the Moosé country, is one of the richest areas of metallurgical remains in the country. The Korsimoro site, particularly impressive, has been the subject of research since 2011. Located 70 km northeast of Ouagadougou, around the small town of Kaya, several important sites for the ancient metallurgy of Burkina Faso are concentrated. Not far from the large furnaces of Tiwêga and Yamané (16th-19th centuries), near the village of Korsimoro, an accumulation of remains marks the landscape.

On a strip of 10 km, thousands of furnace bases and heaps of slag, divided into about ten sectors, testify to intense metallurgical activity: the mass of slag is estimated at between 50,000 and 70,000 tons! Excavations conducted jointly since 2011 by the Universities of Ouagadougou, Abidjan and Freiburg have made it possible to determine the topography and chronology of the sites.