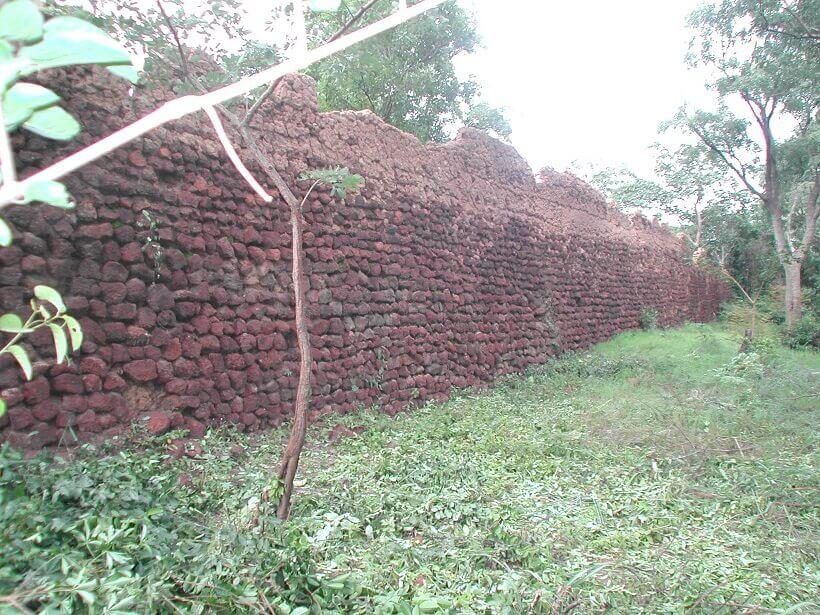 The Ruins of Loropéni are located in the department of Loropéni, about 40 kilometers from Gaoua (capital of the southwest region), in the province of Poni. The site is located 700 meters north of the national road 11 that connects Gaoua to Banfora. The ruins of Loropéni are 430 km away from Ouagadougou, about 400 km of asphalt and 7 hours by road.

The ruins have a shape very close to the square, with peripheral wall lengths varying between 105 and 106 m, for a total area of about 11,130 m2 and housed in a buffer zone of 278.40 ha. The Ruins of Loropéni are an archaeological site consisting of a main rampart that is divided into two main compartments within which are sub-compartments of mainly rectangular shape, oriented North-South or East-West.

It has an almost square shape, with a side length of about 105 m (variation between 105 and 106 m), and whose sides are oriented North-South and East-West. The wall is about 6 m high and is about 1.40 m thick at its base, which gradually reduces towards the top with a thickness of only 25 to 30 cm.

The sections of the wall are almost straight, but there are irregularities, some probably due to movements induced by trees that have grown near or in the walls themselves, or by ground movements. The corners were built with a rounded shape, both inside and out.

Eighty percent of the wall is still present, with some areas having collapsed parts, more or less important, some of which are currently used as access points.

There is no conclusive evidence of an access door. While there is oral evidence of gates, excavations have not confirmed their existence in the locations indicated.

This wall is of the same construction as the surrounding wall, although slightly thinner.  Towards the middle of this wall is an opening that corresponds to a collapse of the masonry.

Inside the compartments there are a wide variety of wall structures, although they all have in common the use of lateritic stone masoned with a gravelly earth mortar.

All of these structures mainly follow a North-South or East-West orientation. The thickness of the walls varies considerably. The minimum observed at the base is 20 to 25 cm, the maximum being 60 to 70 cm.

Some of the walls observed are associated with open spaces, suggesting that they must have been living quarters, while others appear to be more like fence walls, delimiting closed compartments and circulation spaces.

Among these walls and structures we note in particular :

3. Elements outside the enclosure

Vestiges of ancient occupations, some of which may predate the main ruins, have been discovered. Several of them are in the form of anthropic mounds associated with remains of foundations. The others are simple small structures, quadrangular or circular in shape. In the southwest of the ruins, alignments of rubble stones have been observed over a distance of nearly a kilometer connecting a quarry to a former place of habitation that includes two circular enclosures of about twenty meters in diameter. One always finds associated with these vestiges of ancient occupations fragments of millstones, grindstones, ceramics and slag, witnesses of the reduction of iron ore.

Several quarries for the extraction of the rubble that was used to build the walls have been identified around the ruins. All of these remains are well protected by the buffer zone.

Imposing trees grow on giant walls about 6 m high. Studies carried out on the entire buffer zone of the site have revealed a high floristic diversity with an inventory of 218 species divided into 53 families. The site is covered by a wooded savannah. In some places, this savannah is shrubby.

The site and the buffer zone constitute an important reservoir for maintaining the floristic diversity. It includes many medicinal plants and some others with edible seeds or fruits.

The forest gallery along the road to Obiré contains a rare species new to Burkina Faso whose name is Anthostema senegalense . The presence of some animal species is even reported within the buffer zone. Anything that would be a new attraction for the site if it were to be certified.

Archaeological research has uncovered several superimposed structures, all of which proves several periods of use. Results of radiocarbon dating date the occupation of the site back to the 11th century, confirming its greater antiquity than had been previously imagined.

The Ruins of Loropéni and the remains of similar sites are located in a pre-forested area with natural resources favourable for agriculture, gathering, hunting and fishing. However, this particular zone which is part of the Eburnean geosyncline has the particularity of being gold-bearing.

For a very long time, caravans have linked this gold-bearing region to the trading towns of the Niger loop, Djenné, Mopti, Timbuktu, via Bobo-Dioulasso or Kong where Dyula traders were based. From these towns, other caravans took over to cross the Sahara to North Africa.

This period presented a fairly high level of insecurity. In addition to the various conflicts, the covetousness of the goods, and the "slave hunts", one cannot hide the permanent threat represented by the numerous wild animals, including elephants but also lions which, according to oral tradition, were "man-eaters".

This forced the peoples to organize their defense. In the particular geographical context of the surroundings of the city of Loropéni, about ten "fortresses" of the same type as the one called "Ruins of Loropéni" were built. The latter being the best preserved, it was chosen and proposed for inscription on the World Heritage List which took place on June 26, 2009.

The Ruins of Loropéni are the first site in Burkina Faso to have been inscribed on the UNESCO World Heritage List in 2009.

Located about 40km from Gaoua.