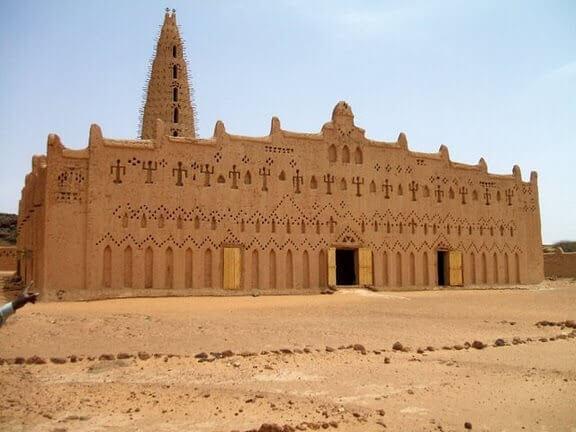 On horseback between Kaya and Dori, Bani (60 km from Dori) is admirable with its mosques. Bani is the city with seven mosques built by El hadj Mohamed. Seven mosques are erected on the hill and represent a person praying from the sky. So many mosques, so few inhabitants, it proves the mysterious passion of the city.

From the site where the seven mosques are built to the materials used for their elevation, through the rock figures of decoration, meaning and significance are the key words. These mosques are erected on the surrounding hills, all directed in the direction of the Great Mosque, located at a lower level.

According to the founder of these mosques, El Hadj Mohamed spent 40 years in the bush and built these mosques without any prior building plans. Better still, the "saint" built them, thanks to his self-taught knowledge of the Koran. So, the small mosques on the hills built according to the position of a man in prayer are placed on the compartments of the human body. One in each palm of the hand, one on each of the two shoulders, another on the neck, and two on each foot. Inside, the floor was beaten and rammed without cement, but the place is suitable for worship and prayer.

The energy used to make the bricks was enormous. Maintaining the Holy Land can take a lot of work.

When you have finished your visit to the Great Mosque, you will notice that it is the center of the world, and no doubt a missionary will provide you with a leaflet explaining that the only true prophet was born in Bani and that the news of Bani must be announced to the world.