Ponds with sacred crocodiles of Sabou

Ponds with sacred crocodiles of Sabou 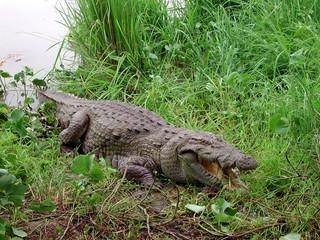 Sabou is a department of Burkina Faso located in the province of Boulkiemdé and in the Centre-West region. In 2006, the last census counted 45,877 inhabitants.

The sacred crocodiles of Sabou. There are more than a hundred of them and they have been living in a pond for centuries on the north side of Sabou. For having saved the life of their hunting ancestor, the descendants of the Kaboré family and the whole village of Sabou with them, venerate these crocodiles.

"These crocodiles represent the souls of the descendants of the Kaboré family in Sabou," says Kuilga Kaboré, who has been a guide since 1989. Today these "other inhabitants" of Sabou are a real tourist attraction. At the edge of the pond, a chicken is enough to get them out of the water for a game of photos. It is possible to pose next to a crocodile or to lift its tail without any risk.

These crocodiles are well protected. During the day the guides accompany the visitors who want to see them and at night the guards follow them closely. On the premises there are hotel infrastructures to welcome and accommodate visitors. Eating, drinking, sleeping and peacefully enjoying the natural air is possible at the sacred crocodile pond of Sabou.

The sacred saurians are surprisingly attentive to the guide and his chicken; in addition to taking pictures, one has the possibility to touch the animals, emotions guaranteed! For the sensitive souls who do not want to witness the death by drowning of the chicken tied to a rope and thrown into the water as bait, you will have to wait until the crocodiles approach or be satisfied with a binocular observation.

Either way, the chicken will sooner or later be put in the pan because the villagers feed their sacred crocodiles to whom they are indebted.

Indeed, a local legend claims that a thirsty warrior, ancestor of the local inhabitants, was once saved by a crocodile who gave him water from a pond to drink.

Nearby, stores display the handicrafts of a nearby center for handicapped children. The objects, mostly decorative, are quite successful and original. A good opportunity to help these children by having fun.

Rates vary according to the number of visitors. Less than five people, each will have to pay 1500F; from five to ten, thousand francs per person; from 11 to 20, 750F per person and over 20 visitors, only 500F each. Several transport companies connect Ouagadougou to Sabou every day on the national road n°1 for 1500 to 2000F depending on whether the bus is air-conditioned or not. A tourist weekend for two or alone in Sabou, surely an excellent idea. Sabou and its sacred crocodiles are waiting for you!