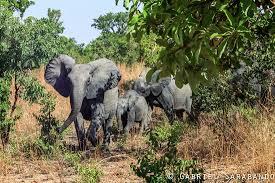 It is the result of the nationalization by the Burkinabe state of the Nazinga Game Ranch, founded in 1979 by brothers Robert and Clark Lungren. These two naturalists experimented with a new concept at the time for West Africa, "ranching", which combines vision tourism and controlled hunting.

It adjoins the Sissili classified forest (327 km2 ), which is also exploited for hunting. Finally, it is close to the Kaboré-Tambi National Park, but is much richer in wildlife than the latter.

Because of the good management of this protected area (especially in the 1980s), a significant fauna has found refuge in Nazinga.

Many tourists come specifically to this reserve to observe them. In addition to elephants, Nazinga has a high density of antelopes, with many hippotracs, as well as Buffon's cobes, Defassa cobes, Bubales, etc.. Buffalos are also present in the reserve. Finally, one can observe the three species of monkeys of the region (baboons, vervets and patas), many crocodiles in the ponds, as well as an important avifauna.