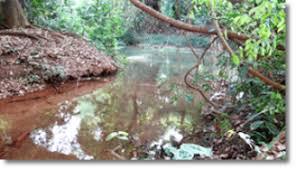 This classified forest is managed by the BKF project and the National Tourist Office since 2006. Classified in 1951, this 115 ha forest is one of the rare remaining examples of a Guinean type forest in Burkina Faso. Its ecological reserve (flora and fauna) makes it a unique example in a Sahelian country.

This forest is irrigated by numerous springs that supply the town of Bobo Dioulasso with drinking water. It is crossed by the Kou River, one of the main tributaries of the Mouhoun. The Kou River irrigates the rice crop located downstream of the forest. It is also crossed by the Guinguette River which flows into the Kou. The area is nicknamed "guinguette" because of a natural swimming pool on the edge of the forest, a pool very popular with tourists and Bobolais.

The good conservation of the forest can be explained by custom: this place is indeed sacred to the surrounding villagers. Tourist pressure has forced the authorities - helped in this by a partnership with the Grand Duchy of Luxembourg - to reinforce the protection of the forest, notably by developing infrastructures outside the forest in order to preserve it only for guided walks and by building a protective wall all around the 115 ha.

The forest employs a whole team: for the reception but also foresters and 10 forest guides, working in shifts of 5 in a day.

The forest of Kou is divided into three zones of vegetation:

Several trees are easily identifiable thanks to ethnobotanical wood panels planted at their base. Alleys are cleared and regularly cleaned to walk through the forest, organized in four thematic trails to encourage ecotourism. Rest areas are set up with benches and baskets used as garbage cans, and rivers are crossed by two suspension bridges.

Aquatic vegetation can be found on the banks of the two rivers: Kou and Guinguette. Lotuses are found there.

The gallery forests meet around the Kou and the Guinguette, forming a very dense belt of vegetation with very tall trees that can reach 30 meters. Some areas are almost impenetrable. The foliage is so dense that you can hardly see the sky. This humid vegetation favors the development of a mycological flora that grows on dead wood or decaying leaves.

The open forests are on the edge. This is the most important part of the forest. The canopies are less dense and let the light pass through. This part includes, among other things, a teak plantation area, exploited by the FCK.

The wooded and wooded savannas are much further apart and the vegetation on the ground presents a grassy carpet formed mainly by grasses.

The Kou forest is also of great interest in terms of fauna: many animals live in the wild, among them crocodiles, snakes of several species (including pythons), agoutis, hares and other small mammals. The rivers are home to fish that are not allowed to be caught.

The Kou forest is best known for its birds: no less than 164 species have been recorded there, both water and land birds.

Access by car to the entrance of the forest by an asphalt road.

Parking in front of the forest.