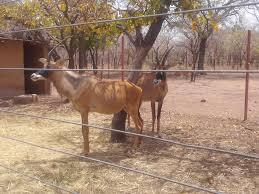 It is the new project of Clark Lungren, initiator of the Nazinga ranch and the extension program that led to the GEPRENAF projects (hence the Comoé-Léraba Classified Forest and Partial Wildlife Reserve managed by the local population organized for this purpose, in the southwest of the country). It still pursues the same objective: to sustainably manage wildlife for the benefit of the rural population. In Wédbila, he is supported by his sons, Derek and Loren.

The general observation is that it is necessary to integrate the local populations in the management of wildlife and to direct the maximum benefits to them so that they find a real economic interest in conservation.

This so-called participatory management has already existed for several decades. It has had some local successes (too often temporary) and some experiences are currently very encouraging in Burkina Faso (Comoé Leraba Forest, Mare aux Hippo...). However, this community management is struggling to be put in place in a sustainable manner, since the sharing of benefits is a concept that fluctuates according to the actors concerned!

A keen observer of the situation, Clark Lungren, passionate about wildlife, seems convinced that wildlife management is a matter of personal investment. In order for the populations living near wilderness areas to participate in their conservation, they must be individually interested. Hence the concept of the animal farm. The objective is to show that such farms can be financially viable by diversifying and optimizing their wildlife enhancement activities (production of animals or animal products for sale, tourism, hunting...).

To date the farm is at the experimental stage and has not yet entered the production phase. The breeding pens are open to visitors and allow close observation of many species that cannot be seen elsewhere in such conditions.

Eventually, 70 hectares will be fenced off and part of the herbivores will be released, making it possible to go for walks in the reserve.

The visit of the farm is very inexpensive (about 2,000 FCFA).