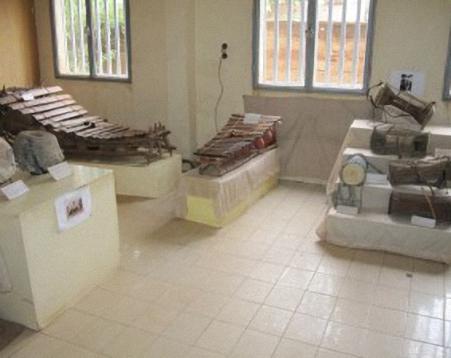 The building that houses the museum, very original, is one of the last witnesses in Ouagadougou of a stabilized earth architecture combining modern technology and traditional materials. It was the headquarters of ADAUA (Association for the Development of Architecture and Urbanism in Africa) from 1980 to 1990, and then housed the Directorate of Cultural Heritage from 1990 to 1996. Renovated and refurbished in September 1998, it became the "Music Museum".

The originality of this building lies in the intention of the promoters: to experiment with local materials (compacted and stabilized earth bricks) while preserving the spirit of African architecture. Thus the architectural style is atypical, borrowing from the North African and Sudano-Sahelian styles made of vaults and domes and a set of small rooms nested within each other. The acoustic qualities born of the materials and architecture predestined it to become the museum of music today.

The mission of the Music Museum is to collect, inventory and promote traditional music and musical instruments in Burkina Faso.

History of the collections At the 2000 inventory, 133 objects were listed. The collections of the Musée de la Musique have two origins: - A loan from the national museum of 25 musical instruments collected until 1996 at the time of IFAN (Institut Français d'Afrique Noire). - The museum's own collections, acquired by purchase and donation, the result of some twenty missions to ten of Burkina's forty-five provinces. They include one hundred and eight objects.

The collections include instruments belonging to the four main families defined as follows:

The Idiophones : 25 instruments : including xylophones from 14 to 22 blades and gourds, 1 xylophone with pit, 3 bells, 7 bells, 2 castanets, 4 sanzas.