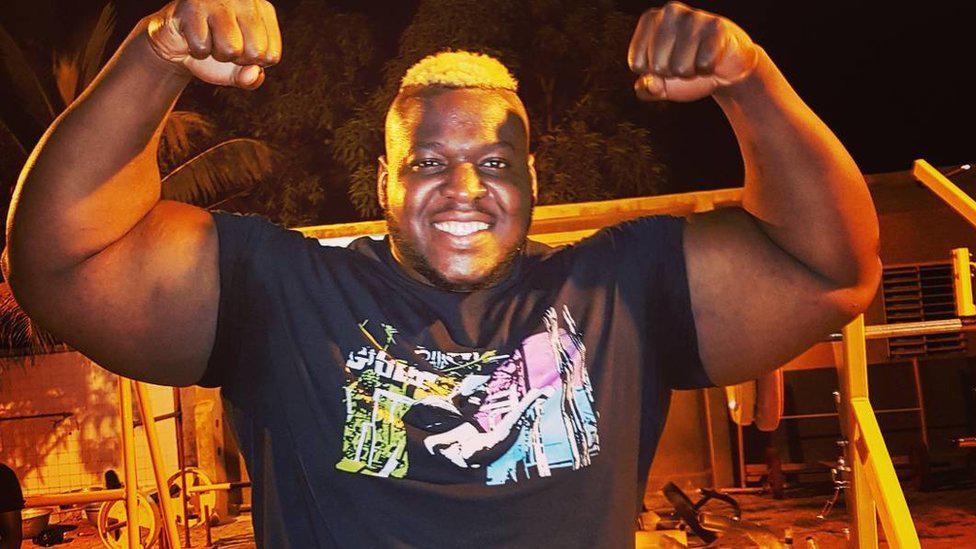 One meter 90, 183 kilos, 66 centimeters of arm circumference ... Iron Biby is a giant. In the courtyard of his house in Bobo-Dioulasso, Burkina Faso, Atlas stones, tree trunks and tractor tires are piled up next to a dozen dumbbells and weight benches.

The 27-year-old from Burkina Faso achieved a feat on April 6 in Leeds, England: he was crowned world log lift champion by lifting a load of 220 kilos above his shoulders. Since then, Iron Biby, the first African to win this title, has been a source of national pride in Burkina Faso.

First Burkinabé in the Guinness Book

For a long time, however, Cheick Ahmed Al-Hassan Sanou - his real name - suffered from not being a "normal" little boy. Complexed by his corpulence, he was mocked by his classmates. He was told that he was "too fat" and "too slow". "I've always played a lot of sports and tried a lot of diets, but nothing worked," says this basketball and soccer fan. He dreams of being a great athlete and getting into the NBA, but his weight is getting in the way.

The shy son of a school principal "cashes in" to the day when, at age 9, he can't help but push away a bad joke five years his senior. "That's the only time. I've never been abusive, my father always taught me to respect others," he still regrets. But this ordinary schoolyard accident triggered a trigger in him. This body that he finds so hard to love will become his "strength," he realizes.

At the age of 17, Cheick Ahmed Al-Hassan Sanou left to study in Canada, where he obtained a master's degree in business administration. "I started training at the gym between classes, but instead of losing weight I was getting stronger every day," recalls the man who worked as a casino security guard at night to pay for his accommodation.

In 2013, he was introduced to "powerlifting" (athletic strength, in French), a sport that involves lifting and moving very heavy loads. He never heard of it but he took up the sport and very quickly won his first competitions. The following year, he already qualified at the world level. "Everyone was impressed, I wanted to be the best," confides the self-taught man. Pushing his limits became a passion, pulling trucks and lifting rocks, a "hobby".

Iron Biby will be the first Burkinabe to appear in the Guinness Book of Records, first in 2018 and then in 2019, lifting a 60 kilogram person 82 times in one minute. "A pride for my country," he slides, modest.

Pulling an airplane from the national airline

In the Sanou family home, trophies and medals now clutter the shelves and walls of the living room. Sitting on the sofa, the father looks at them with a touch of emotion. "Biby wasn't just another baby. We always encouraged him to believe in his dreams, but we didn't expect him to go that far. I'm proud," says Lancina Sanou, still surprised by her son's meteoric rise to fame.

From the tarmac of Ouagadougou airport, where he was greeted as a hero by a crowd of fans on his return from England, to the streets of Bobo-Dioulasso, now difficult to pass incognito. "Iron Biby, a selfie! "the cheers of passers-by as they watched him drive around in his blue sports car. As soon as I set foot outside, people recognize me," he explains, embarrassed. So I prefer to stay home and work and lead my quiet life. »

When he's not working out, he helps manage the administration of the three schools of the retired "daddy", "gives a hand" on his construction sites or builds new weight training equipment. "There's always something to do. I come from a wealthy family, but I was taught to work very hard. I don't believe in entertainment, every day I try to be better than the day before," he preaches.

Iron Biby, who always leaves his door "open to the kids in the neighborhood," hopes to become a role model for the youth of his country. They often come to me for advice or to try out the machines," he says. I encourage them to be proud of their bodies and their differences," he says. His next project: to open a sports center in Bobo-Dioulasso. "There is a lot of talent here, but they are neglected and are dying out. I want to wake them up. It's their turn to outdo me! »

In the meantime, Iron Biby continues to train hard, three to four hours a day,