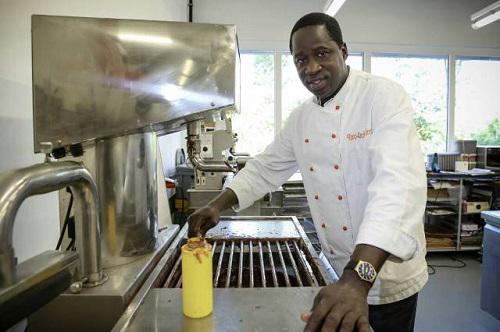 André Bayala, better known as Chef André, is a Burkinabe chocolate craftsman. His specialty is the transformation of cocoa into chocolate. It is this man who raised the flag of Faso very high, winning the title of Great Chocolatier of Africa in 2016. The man's reputation extends beyond the borders of Burkina Faso and even Africa.

The chocolate of "Chez chef André" is a mark of excellence. It is sold in Burkina Faso, Africa, Europe and the United States. But behind this know-how lies a life story dedicated to pastry making. André Bayala's journey has been long and full of lessons. It is the story of a man who places training at the heart of everything.

Where does Chef André come from?

André Bayala stopped his studies in ninth grade. "To look for reference points in the field of food processing," he says. His first steps were taken in the university restaurant (UK) as a diver. After the R.U., he took the direction of the Ivory Coast to train. During five years, André Bayala familiarizes himself with the food trades such as pastry, bakery, chocolate factory.  He will work in Ivory Coast until the crisis of 2002. However, the crisis was not a reason to give up. He then continued his adventure in Senegal to perfect his skills.

In 2009, André Bayala returned to Burkina Faso. He will find the level of pastry "completely down to earth". It is then that he starts training in pastry. "In Ouagadougou, 90% of pastry chefs have been trained in my hands," he tells us. The man held the pastry of the "Baguette du Faso" and the "Pearl". It is from the Pearl that André Bayala participated in the African Chocolate Championship in 2016. He was the winner. But he is still not satisfied. The champion of African chocolate, as a true enthusiast, decided to train more after his continental title. He then goes to Geneva to specialize in the transformation of cocoa into chocolate. As soon as he returned from Geneva, Chef André set up his own business "Chez chef André".