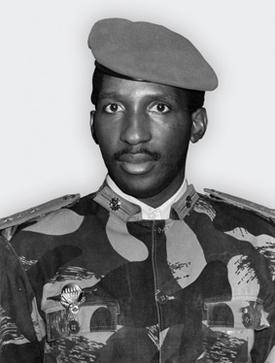 Thomas Sankara, born on 21 December 1949 in Yako, Upper Volta, and assassinated on 15 October 1987 in Ouagadougou, Burkina Faso, was an anti-imperialist, revolutionary, socialist, pan-Africanist and Third World Volta statesman, then BurkinabèNote 2, head of state of the Republic of Upper Volta, renamed Burkina Faso, from 1983 to 1987.

He was the president of the country during the period of the first Burkinabe revolution from 4 August 1983 to 15 October 1987, which he ended up fully embodying. During these four years, he led a forced march, including the repression of some rival unions or political organizations, a policy of national emancipation (for example, by changing the name of Upper Volta from the colonial era to a name derived from African tradition: Burkina Faso, which is a mixture of moré and dioula and means Country [or Homeland] of upright men), development of the country, the fight against corruption and the liberation of women.

He was shot during a coup d'état that brought Blaise Compaoré to power on October 15, 1987. His memory remains vivid in the youth of Burkina Faso but also more generally in Africa, which has made him an icon, an "African Che Guevara", alongside Patrice Lumumba.

Thomas Isidore Noël Sankara is the son of a Fulani father and a Mossi mother1, and grew up between military values and Christian religiosity2. His father is a veteran and prisoner of war of the Second World War. The successive postings of his father, who became a police nurse, in several regions of the country enabled him to escape the great poverty in which most "indigenous people" live.3 He did his secondary education first at the Ouezzin Coulibaly high school in Bobo-Dioulasso, the second city and economic capital of the country, and then, from the second grade to the baccalaureate, in Ouagadougou (the political capital of Burkina Faso), at the military Prytanée of Kadiogo. During his studies, he rubbed shoulders with the sons of colonists. He served mass but refused to enter the seminary4. Like Blaise Compaoré, he trained as an officer at the Inter-Arms Military School (EMIA) in Yaoundé, Cameroon, then at the Military Academy of Antsirabe, Madagascar (where he studied political science, political economy, French and agricultural sciences4 ), and in 1976 became commander of the CNEC, the National Commando Training Center, located in Po, in the province of Nahouri, 150 km south of the capital. The same year, they took part in a training course in Morocco. Together, they founded the Regroupement des officiers communistes (ROC), whose other best-known members are Henri Zongo, Boukary Kabore, Blaise Compaoré and Jean-Baptiste Boukary Lingani. 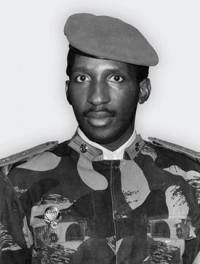