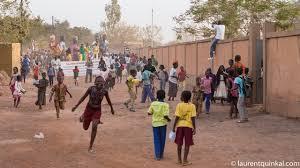 Since 2009, the ACMUR collective has been organizing the completely free and off-site festival every year "Rendez-vous chez nous - The villages of Africa welcome street arts".

A true platform for creations in West Africa, the festival welcomes numerous African and European artistic companies every year.

This major event for rural and urban populations is a moment of gathering and sharing made possible by the promotion of an art that chooses to reach out to the populations. Each edition is set up in the streets of Ouagadougou, Bobo-Dioulasso, Boromo, but also in six villages in the rural commune of Komsilga and in the orphanage of Loumbila.

The festival actively contributes to the decentralization and democratization of art in Burkina Faso and is part of a logic of development and structuring of street arts: