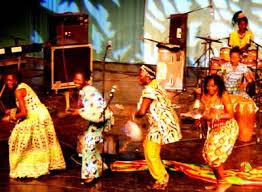 It was created in 1996 by the Association Benebnooma de Koudougou, and strongly supported by the "Festival Mundial" of Tilburg in Holland, and the "Nuits Atypiques de Langon" in France.

Since their birth, the NAK have wanted to be "a link between all the peoples of the world". And each edition has seen the will and efforts of the Organizing Committee to ensure that a greater number of countries and regions are represented.

The NAKs take place every year in the last week of November.

The NAKs, which started as a self-financing event (the Saaba troupe) with the support of some friends of the Benebnooma Association, were already affirming their will to change the cultural landscape of Burkina Faso. The NAKs have demonstrated and still demonstrate how the conviction of a man, a group, a population, a country, can give the necessary resources for the most benign, the simplest expression, so that it becomes a springboard for national development.

By remaining well focused on the pursuit of these objectives, the NAK organizing committee has succeeded in making this event an essential crossroads and a key springboard for artists seeking to gain stature.

With nearly 200,000 registered festival-goers at the 23rd edition held in 2018, it is clear that the event is no longer something to brag about. Moreover, let's not forget that the NAK has been awarded a prize at Kundé 2019; an award that bears witness to the impact of this festival on the national musical universe.