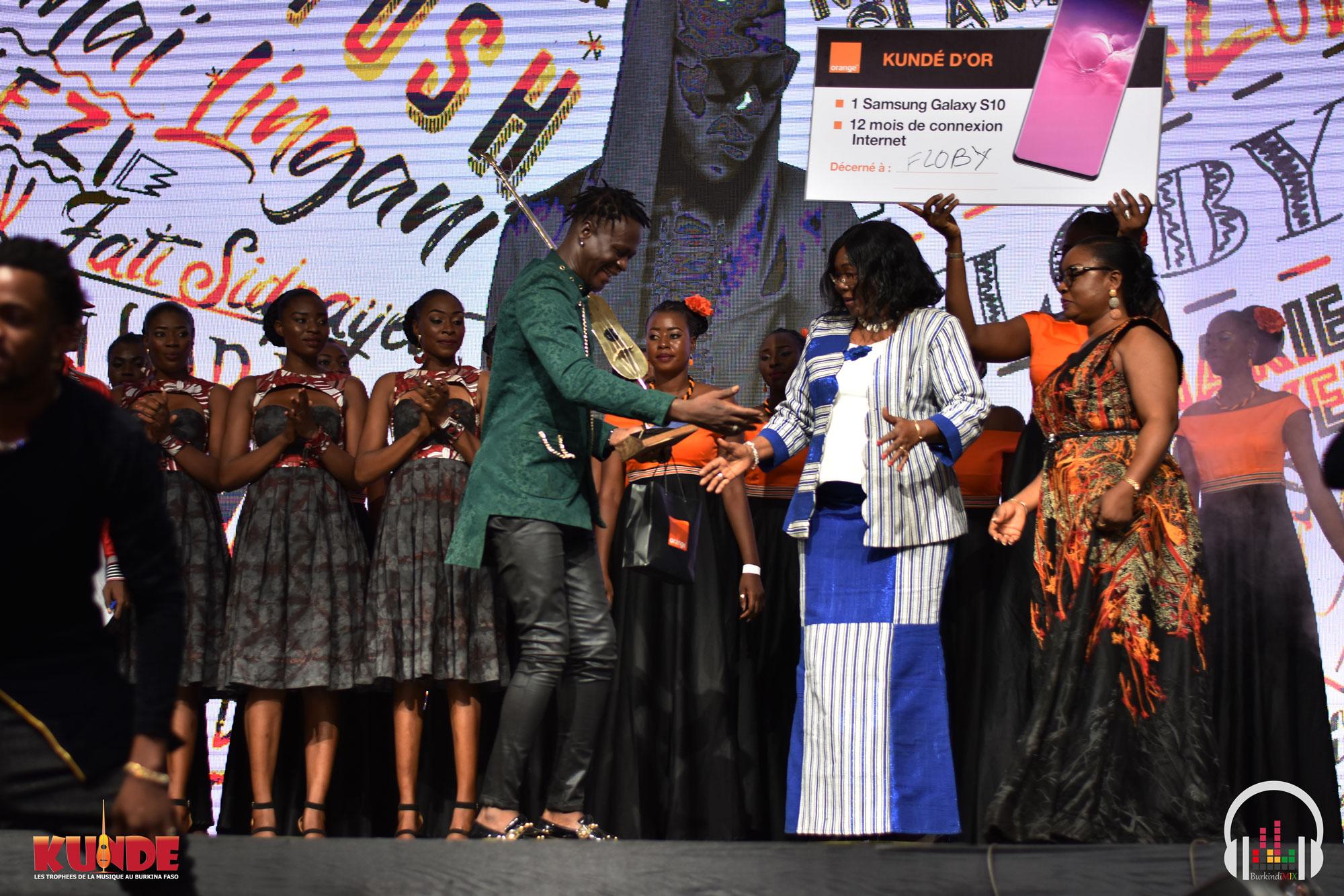 KUNDÉ, 20 YEARS OF EXCELLENCE IN THE SERVICE OF BURKINABÈ MUSIC

Paris, 1996, Charles de Gaulle de Roissy airport. A French customs officer is staring at a young African returning from an internship at the INA, the National Audiovisual Institute of Paris.

Dialogue between the two men: - What do you have to declare? - Nothing, apart from personal belongings. And yet, this young man is carrying in his suitcase an innovative project that will, for twenty years, be the barometer of music in Burkina Faso and become the most popular show of the Burkinabe jet set. This young man is called Jah Press and his project is called Kundé, from the "mooré" name of this three-stringed guitar that can also be found in Mandinka, Bissa and Peulh countries.

If the idea was born in 1996, it will be necessary to wait until 2001, for lack of sufficient musical productions, to see the first edition of Kundé. The challenge is immense: to succeed in an annual award ceremony rich in sounds, lights, stars, rhinestones and sequins in a country renowned for its modest sponsorship of cultural initiatives.

Making his own the saying according to which "With a valiant heart, nothing is impossible", Jah Press, with an army of show-biz musketeers (Papus Ismaël Zongo, Maguy Lesli Oka, Boureima Djiga, Somda Gervais dit Mister P., Azize Bamogo and the late Gaston Palé) throws himself body and soul into the project. Accompanied in this by the support of the press, the actors of the music world, some patrons and ... especially the public.

THE KUNDÉ, BAROMETER OF MUSIC IN BURKINA FASO

Vignt years later, a prowess and a great merit for a non-state award ceremony on the African continent, this obstinacy has succeeded in making Kundé, the barometer of music in Burkina Faso, a standard for measuring the quality of the discographic works and artists, and a promotional objective for the music producers of our country.

The Kundé have succeeded in giving musicians recognition for work that is not always perceived by the general public and decision-makers. As soon as the list of nominees is published, interest is aroused and the artists musicians and singers attract everyone's attention.

In addition, the opening of the event to foreign and international artists creates a cultural mix, breaks down complexes and promotes relations between show-biz professionals, between foreign promoters and national artists. This is fruitful for the music and artists of Burkina Faso.

THE KUNDÉ, THE MOST PRESTIGIOUS EVENT OF UEMOA

For the most knowledgeable observers of African show-biz, Kundé is the most prestigious event in the UEMOA space because of its organizational consistency and the richness of its artistic platform. Moreover, it would be a good idea to add that by its glitz, made of rhinestones, international stars and sequins, Kundé has managed to position itself as the most chic major event in the capital and the most awaited rendezvous of the Burkinabe jet set.

In twenty years of uninterrupted implementation, the Kunde General Commissariat has introduced major innovations in the ceremony. This was done in order to frame the event with the new data on the evolution of music in Burkina Faso and to take into account the suggestions made by the actors of the sector.

For the General Commissariat of Kundé, these innovations also respond to the desire to consolidate the gains made during previous editions, correct the shortcomings noted and meet the new challenges facing Kundé and music in Burkina Faso. Because for its creator" the main difficulty lies in the weakness of the financing of the event. »

If the Kundé have succeeded in embodying the slogan of barometer of music in Burkina Faso and proved, during twenty years, its organizational capacity and its impact on the excellence of musical creation in Faso, it is time for the economic and political decision-makers of the country to bring a consequent support to the event.

In 1999, Jah Press had an appointment with the then Minister of Culture, Mr. Mahamoudou Ouédraogo, to present his project which was still called "Balafons d'or".

The meeting between the two men of culture goes well and the Minister is immediately enthusiastic about the project. Everything seems to please him, except that, as an astute man of culture, the Minister remarked that the balafon is a typical instrument of the southwestern region of Burkina Faso, and that it is necessary to find the name of an instrument that federates the different ethnic components of Burkina Faso.

After his audience, Jah Press went to the music museum, located not far from the Ministry of Culture. At the music museum, he inquired about the different musical instruments on display. One instrument caught his attention; it is a three-stringed guitar that can be found in the southwest of Burkina Faso, as well as in Mossi, Dioula, Bissa and Peulh countries. A musical instrument which, as the Minister Mahamoudou Ouédraogo wished, is federating the different ethnic components of the country.

He therefore decided to adopt the name "Kundé" from the mooré name of the instrument.

Kundé! a name that today rhymes with the excellence of Burkinabe music.

THE DATE AND YEAR OF THE KUNDÉ

Kundé are held every last Friday in April.

There are two main categories of Kundé awards: main awards and special awards.

The main Kundé prices are :

-Kundé of the best female artist

-Kundé of the best modern song of traditional inspiration

-Kundé of the most played artist in discotheque

-Kundé of the best video clip

-Kundé of the best featuring burkinabè

The special Kundé prices are :

-Kundé of the best Burkinabe artist of the Diaspora

-Kundé of the best foreign artist living in Burkina Faso

-Kundé of the best artist of West Africa

-Kundé of the best artist of Central Africa

In addition to these awards, Kundes of Honor and Tribute are awarded.

The prizes in these different categories are adjusted according to the musical production of the Kundé year.